Endometriosis is defined as a chronic inflammatory disease characterized by the presence of endometrial tissue outside the uterus that results in pelvic pain and infertility,1 both of which diminish patient quality of life. Typical symptoms of endometriosis include dysmenorrhea, dyspareunia, menorrhagia, non-menstrual cycle pelvic pain, dysuria, chronic fatigue, and infertility.2,3 Levels of both estrogen and progesterone play a role in the pain associated with endometriosis; endometriotic lesions display variable levels of estrogen and progesterone receptors, influencing hormonal responsiveness.4

Treatment options for endometriosis may be classified as hormonal, non-hormonal, non-pharmacological, and surgical. Evidence-based data is greatest for hormonal therapies as there is limited data on non-hormonal (e.g., magnesium, minerals, and vitamins B1 and B6) and non-pharmacological (e.g., acupuncture, psychological, and transcutaneous electrical nerve stimulator) therapies.6 Of note, data suggest that nearly 25% of OB-GYN clinicians prescribe opioid therapy for endometriosis, and nearly 20% prescribe opioid therapy for chronic pelvic pain of unknown cause;7 the use of opioids for chronic pelvic pain (e.g., endometriosis and interstitial cystitis) should be avoided due to the limited evidence of their effectiveness in these pain states.8 Laparoscopic surgery (e.g., ablation and excision) may significantly improve pain associated with endometriosis as well as increase clinical pregnancy rates in women with endometriosis.9,10

Currently available hormonal therapies include, but are not limited to:6,11 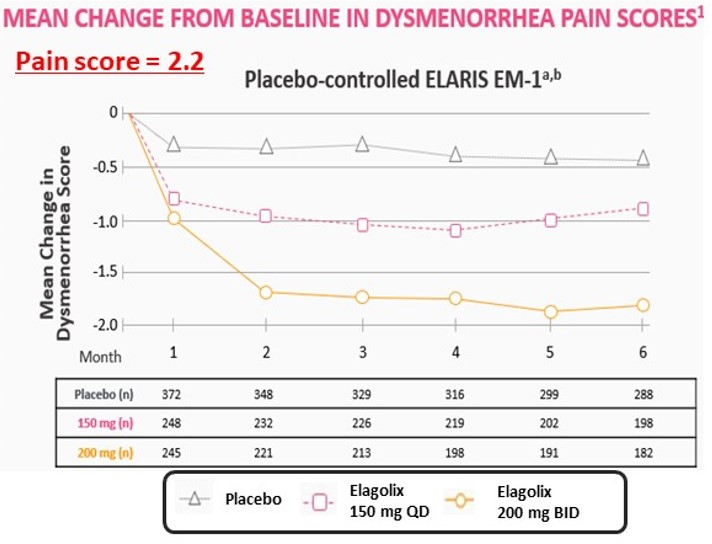 Efforts are continuing to find more effective and favorably tolerated treatment options for endometriosis and/or the pain associated with endometriosis. Such agents may include, but are not limited to:11

Shared decision making is a process emphasizing collaborative interaction between the patient and physician in arriving at informed treatment decisions. Data indicate that shared decision making can improve patient adherence to treatment and improve outcomes as well.25-27 Through this process, patients have a better understanding of disease consequences, benefits of therapy, and potential risks associated with treatment. Indeed, better collaboration between the patient and physician results in improved patient experience. For patients with endometriosis, that includes discussions about infertility and risk communication.

Endometriosis is a chronic disease associated with significant morbidity, which is why it necessitates long-term treatment. Medical therapy and surgical approach are recommended by clinical practice guidelines for its management, with medical therapy recommended as a first option in most cases. Medical therapy should be individualized based on patient symptoms and the severity of disease in the context of quality of life.

Endometriosis is a chronic disease associated with significant morbidity, which is why it necessitates personalized, long-term treatment.

If you’ve already completed the activity.

Stay current with the best on medical education

We’re glad to see you’re enjoying Omnia Education…
but how about a more personalized experience?

Register for free
You are now leaving Omnia Education and going to a site run by another organization.

Press cancel to remain on Omnia Education. Press the link below or the continue button to keep going.